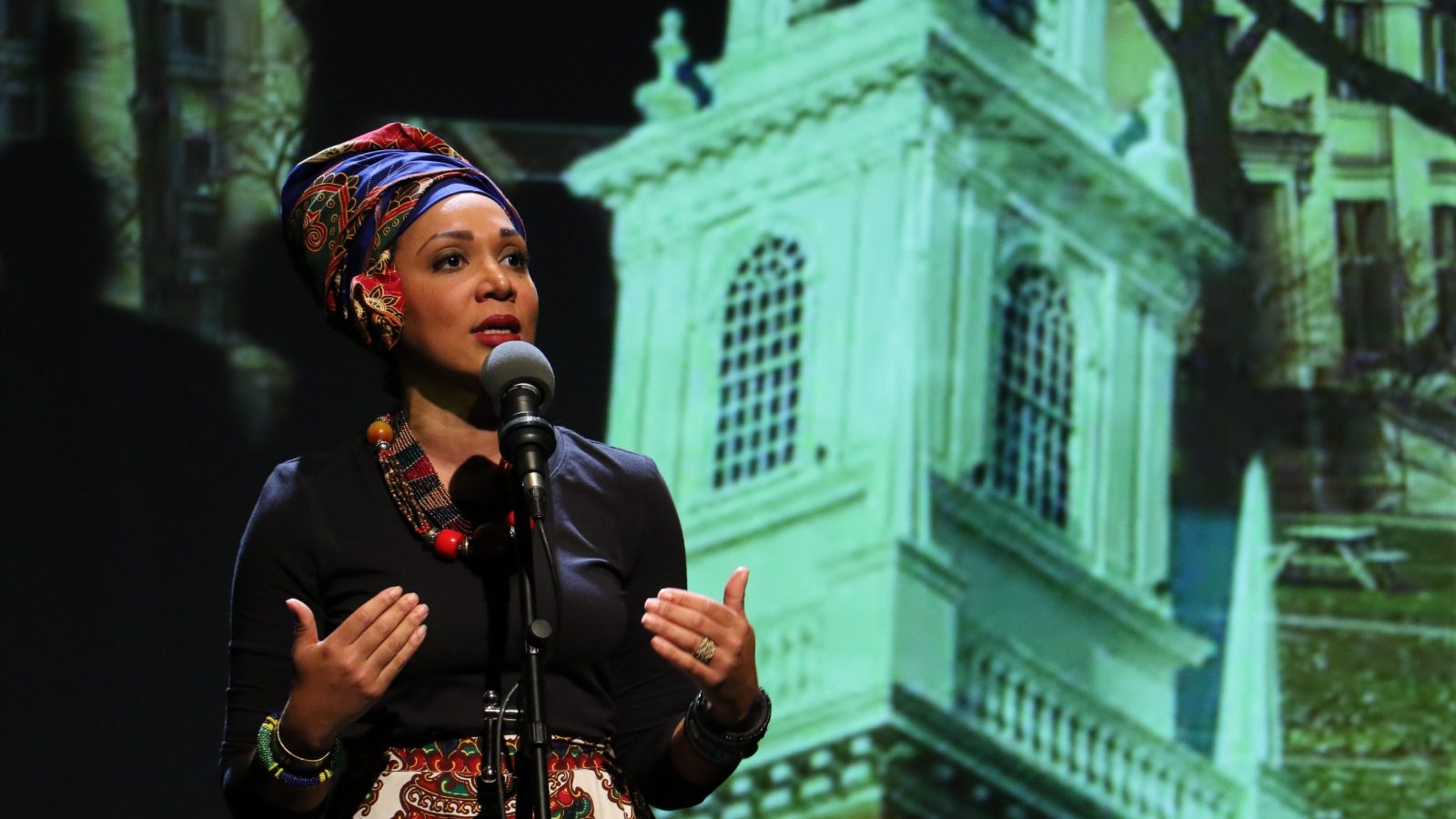 Playwrights Carol K. Mack (who conceived the play), Anna Deavere Smith, Paula Cizmar, Catherine Filloux, Gail Kriegel, Ruth Margraff, and Susan Yankowitz collaborated to create a tapestry of stories that weave together the words of these women, dramatizing their struggles and triumphs over resistance, death threats, entrenched norms, and pervasive violence. Since the premiere in 2008, the piece has been translated into 27 languages and performed worldwide in over 30 countries, sharing with an international audience these inspiring tales of bravery and perseverance.

SEVEN makes the powerful and timeless statement that even in the darkest times, one person, one voice, and a single act of courage can change the lives of thousands.

The extraordinary cast of film, television, and stage actresses includes Maritxell Carrero (Anabella De Leon) who was lead actress in the Peter Sellars opera The Indian Queen, performed at the English National Opera and the Bolshoi Theater. Carrero's TV credits include Dame Chocolate and Bajo Las Riendas del Amor. Lovlee Carroll (Mukhtar Mai) has been seen on TV in Grey’s Anatomy, How To Get Away with Murder, and Scorpion, and in the films Candy Corn, The Last Conception, and Await the Dawn.

The stage and television actress Tess Lina will play the role of Mu Sochua. Lina has a lengthy list of stage credits, including those with the Guthrie Theatre, La Jolla Playhouse, and the Mark Taper Forum. On television, she has been seen in House, How To Get Away with Murder, Law and Order: Criminal Intent, and others. Laila Ayad (Farida Azizi) has performed off-Broadway and in the national tour of The Mystery of King Tut. On television, Ayad has been seen in Scandal, Grey’s Anatomy, and others. The cast also includes the actresses Sarah Hollis (Hafsat Abiola-Costello), who has been in the films The Russian Doll and Kill Your Darlings and on television in The Unit and 24; Ellis Greer (Inez McCormack); and LA Theatre Works regular Shannon Holt (Marina Pisklakova-Parker). Holt’s long list of credits includes roles for the Public Theatre and Trinity Rep and appearances on a wide range of TV series such as ER and Seinfeld.

SEVEN was created with the support of the Vital Voices Global Partnership, the preeminent non-governmental organization (NGO) that identifies, trains, and empowers extraordinary women around the world by unleashing their leadership potential to transform lives and accelerate peace and prosperity in their communities. These women have returned home to train and mentor more than 500,000 additional women and girls in their communities. They are the vital voices of our time.

Please note, this performance contains subject matter that may be inappropriate for young audiences, including stories of physical and sexual assault. No explicit violence is depicted. Sounds of gunfire, rocket fire, and warfare are played, and projections show soldiers holding guns.

THE WOMEN OF SEVEN

Marina Pisklakova-Parker, Russia
Against tremendous odds, in 1993 Marina Pisklakova-Parker founded the first hotline for victims of domestic violence in Russia. At the time, there was no name for domestic abuse in her country. Despite reticent law enforcement and in the midst of threats from abusers, Pisklakova-Parker persisted. Her efforts have since grown into Center ANNA and a coalition of hundreds of crisis centers that provide counseling services to over 100,000 Russian women per year.

Mu Sochua, Cambodia
Mu Sochua is a Human Rights Advocate and the former Minister of Women’s Affairs in Cambodia (one of only two women in the government cabinet). She grew up outside of Cambodia, having been sent away for her protection by her parents, who perished in the Killing Fields of Pol Pot. She was co-nominated in 2005 for the Nobel Peace Prize for her work against sex trafficking of women in Cambodia and neighboring Thailand. After door-to-door visits to 482 villages, Mu Sochua won a seat in Parliament in July 2008 and was re-elected in 2013.

Anabella De Leon, Guatemala
Anabella De Leon raised herself and her family from poverty in Guatemala by getting an education, which was exceptionally rare for a young woman coming from the poorest communities. In 1995 after earning a law degree, she became a member of Guatemala’s congress while devoting herself to the struggle for human rights. She has received multiple death threats as a result of her fight against corruption and for the rights of the poor and indigenous peoples.

Inez McCormack, Northern Ireland (deceased 2013)
Inez McCormack was an internationally renowned and hugely influential human rights and Irish trade union activist. McCormack was the first full-time female official of National Union of Public Employees (NUPE), the first female regional secretary of UNISON (Public Service Union), and the first female president of the Irish Congress of Trade Unions. She played a critical role in the 1998 Good Friday Peace Accords and continued to advocate for equal rights and fair labor practices for women and minorities. In 2006 she founded the Participation and Practice of Rights Project (PPR), helping the disadvantaged access resources and services in Ireland, both North and South. McCormack continued to advise and support PPR until her death in 2013.

Farida Azizi, Afghanistan
Farida Azizi became an activist fighting the marginalization of women under Taliban rule in her native country of Afghanistan. Azizi often traveled alone to rural districts to bring medical supplies and care to women who were abused and persecuted by the Taliban. Threats to her life forced her to seek asylum in the United States, where she now lives with her two children. She continues to work on women’s rights issues and peace-building for Afghanistan.

Hafsat Abiola-Costello, Nigeria
Hafsat Abiola-Costello founded the Kudirat Initiative for Democracy and became an advocate for human rights and democracy in Nigeria following the murder of her activist parents. The initiative provides skill-training and leadership opportunities for young women across Nigeria. Abiola-Costello served as the youngest member of the Ogun State cabinet in Nigeria and the special adviser on the Millennium Development Goals to the state governor. She was educated in America at Harvard University.

Mukhtar Mai, Pakistan
Mukhtar Mai, at age 30, was gang raped in a form of honor revenge. Mai’s harrowing story grabbed headlines across the world. Although the custom would be for her to commit suicide following a rape, she instead brought her rapists to justice, built schools to improve the conditions for young women, and became an advocate for education in her country. The organization she founded is the champion of women’s rights and education in the Southern region of Punjab Province, Pakistan. This region is known for some of the world’s worst examples of women’s rights violations. Her story has been the subject of numerous documentaries, books, and an opera.

Under the leadership of Producing Director Susan Albert Loewenberg, L.A. Theatre Works (LATW) has been the foremost radio theatre company in the United States for more than 25 years. LATW is broadcast weekly in America on public radio stations, streamed online, and aired on additional international outlets, including the BBC.

LATW has delighted audiences with its unique live radio theatre-style performances in over 200 small towns and major cities, including New York, Boston, San Francisco, Washington, Chicago, Beijing, and Shanghai—as well as two previous performances right here in Blacksburg. An LATW performance is immediate, spontaneous, and features a first-rate cast and live sound effects, creating a sound-rich, intimate experience that draws audiences into the stories and performances. 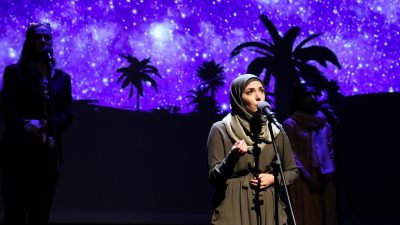 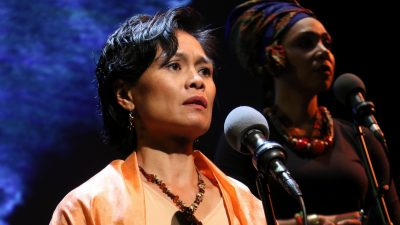 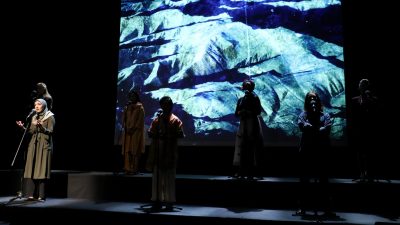 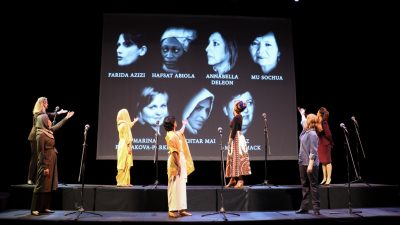