"The Shape of Distance"

Blue is the color of distance for Choi, as landscapes appear bluish from afar, as light scatters in the atmosphere. Choi’s depiction of highways evokes familiarity—one that became a remedy for the alienation she experienced as a Korean immigrant. The mirrored effect of driving on the interstate and looking out to the horizon reconnected Choi to a sense of home.

Entering the gallery, the sun-shaped mural of Shape of Distance (Faceted Circle) on the far wall becomes an alternate for the sky. The postcard image of a byway nested between forested hills repeats and distorts as it approaches the edge, reinforcing an allusion to the gravitational force of a planet binding the sky to the landscape. The monumental scale immerses the viewer in Choi’s perspective-bending imagery and miniature brushwork seen in her shaped panels and painted sculptures that fill the gallery. 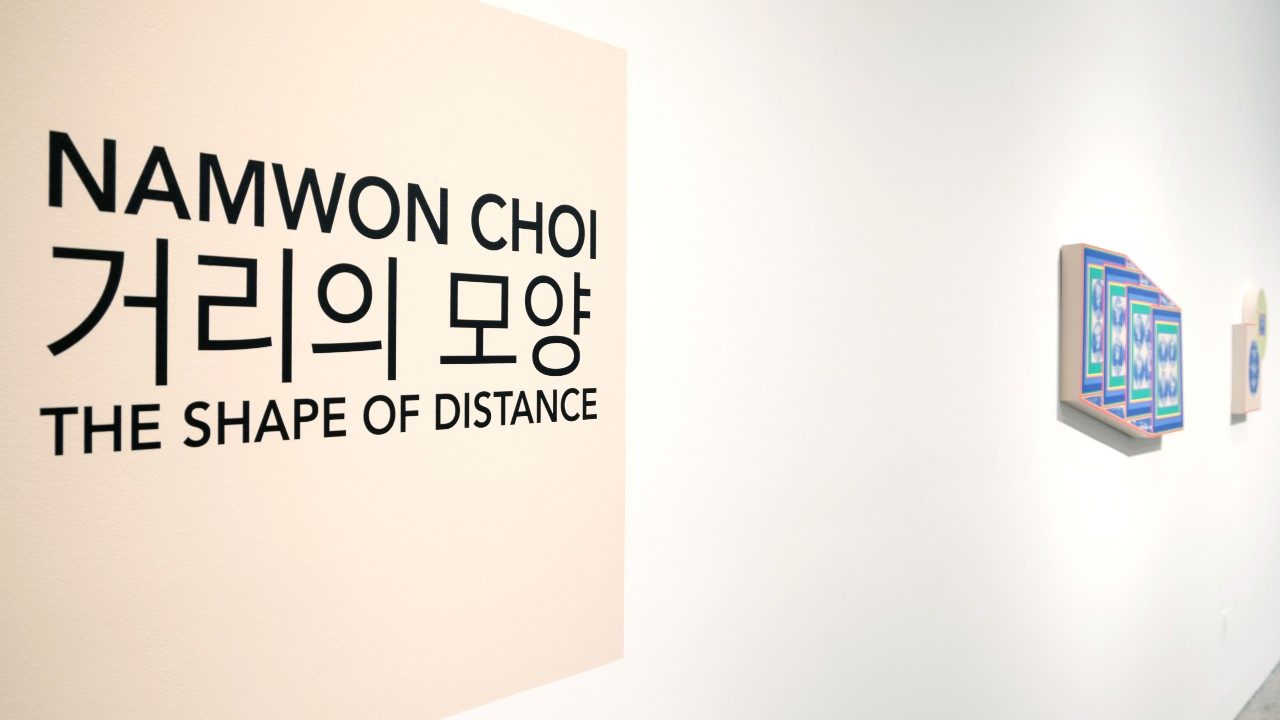 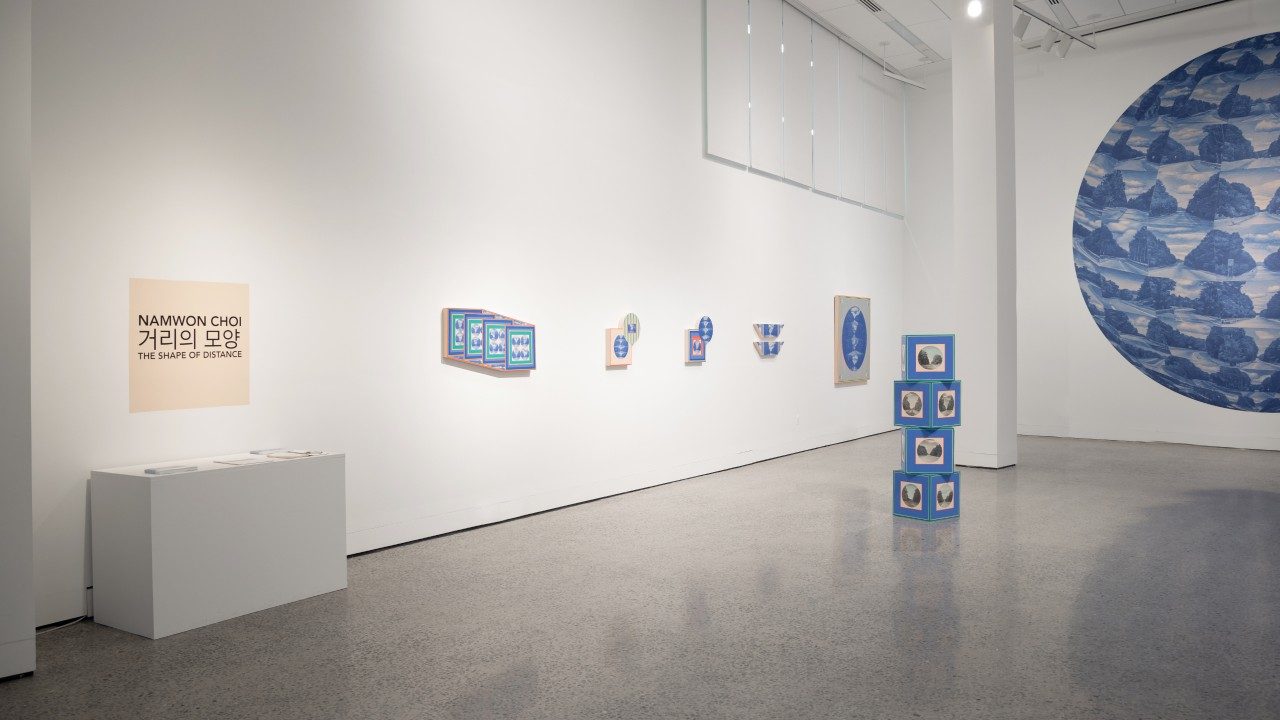 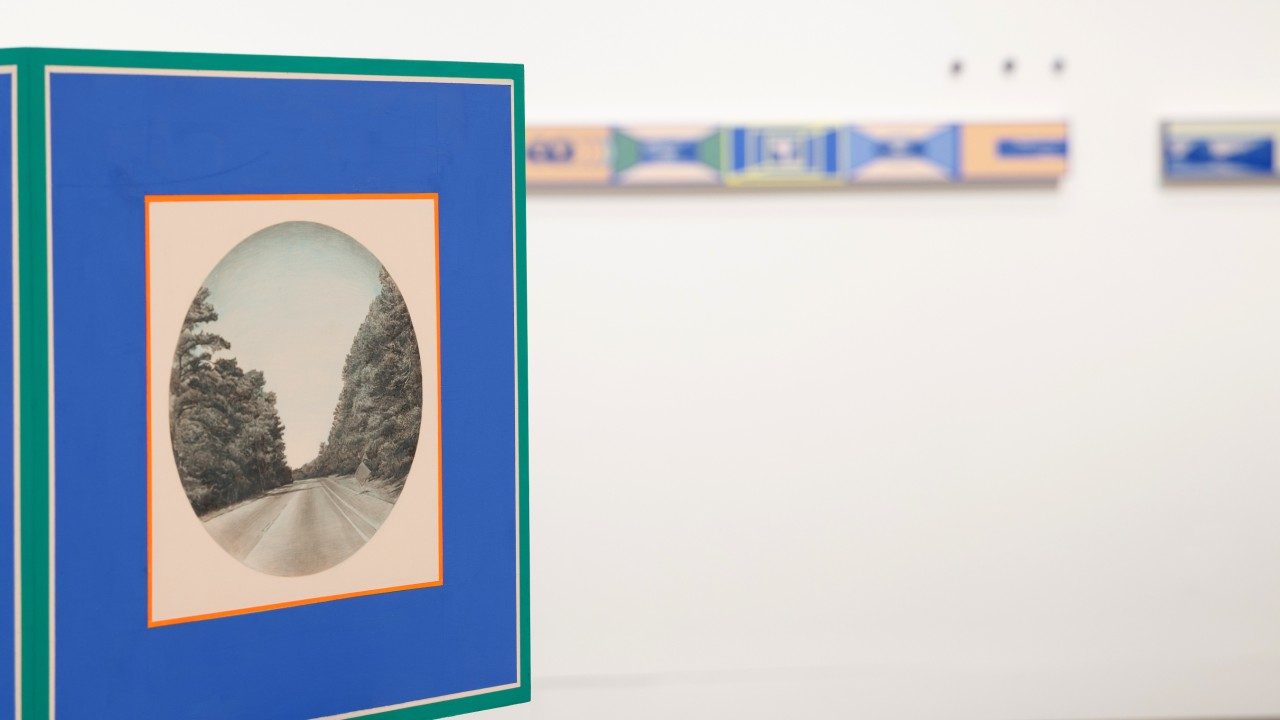 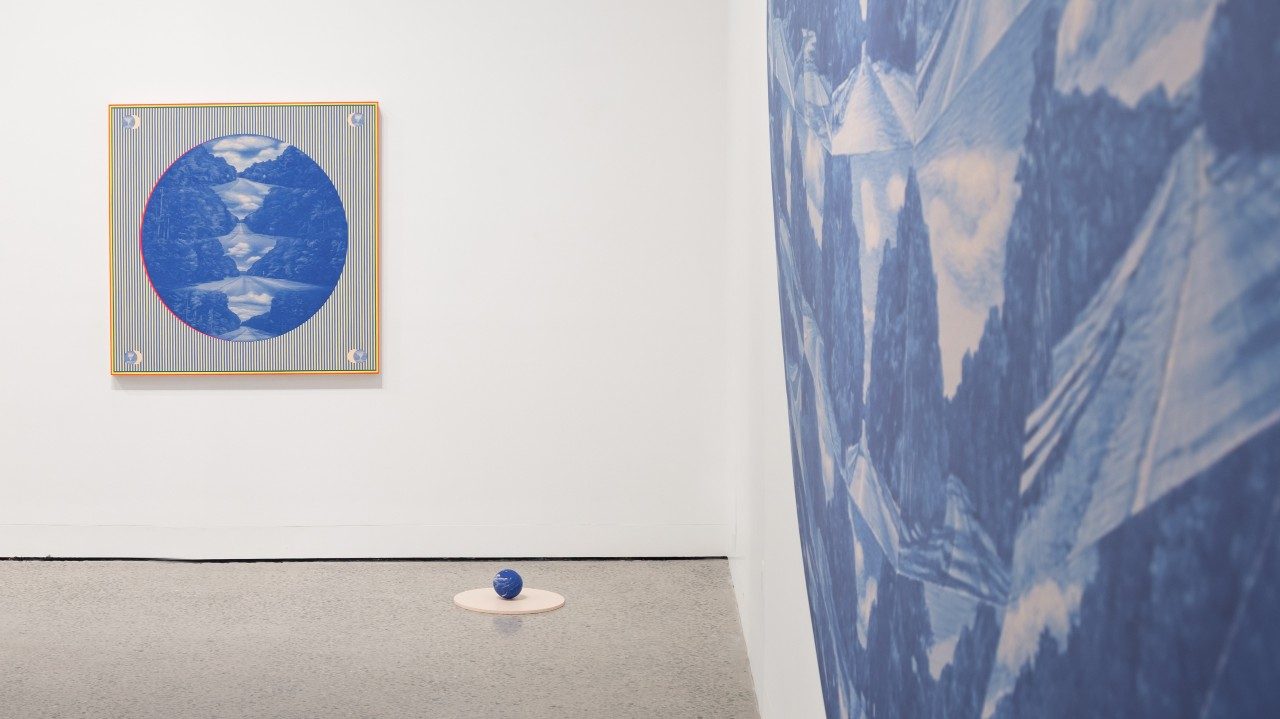 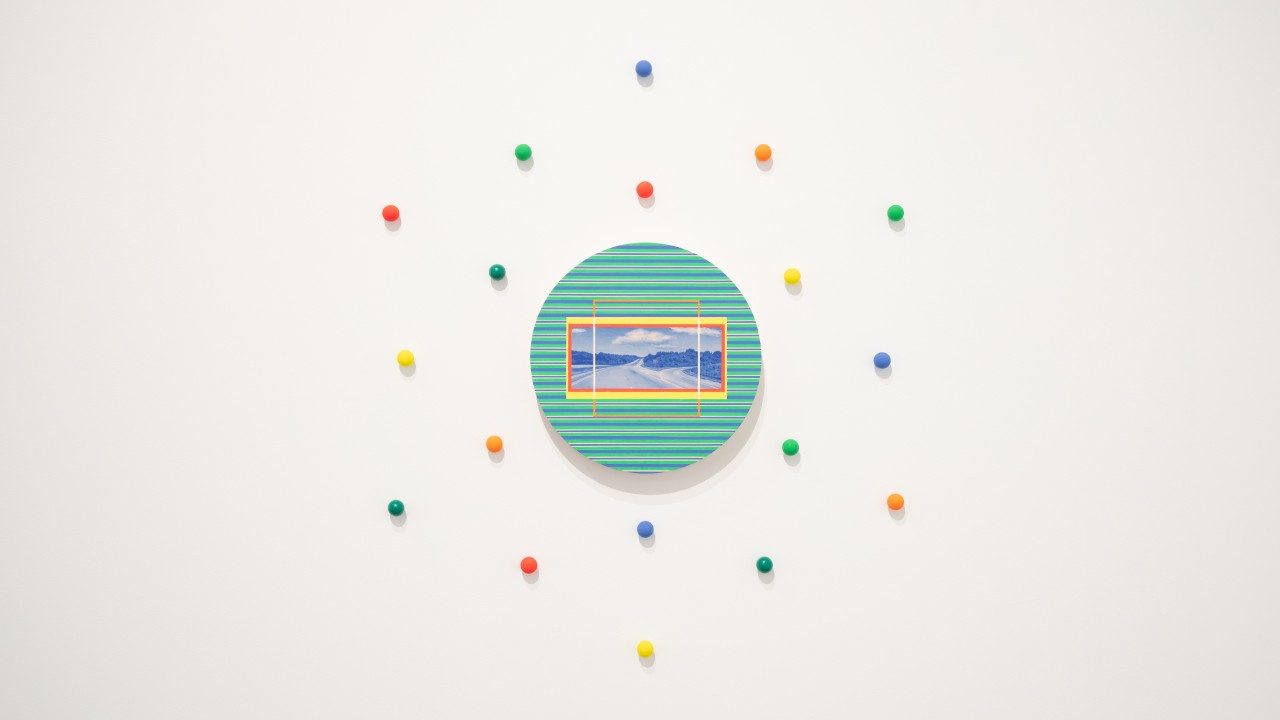 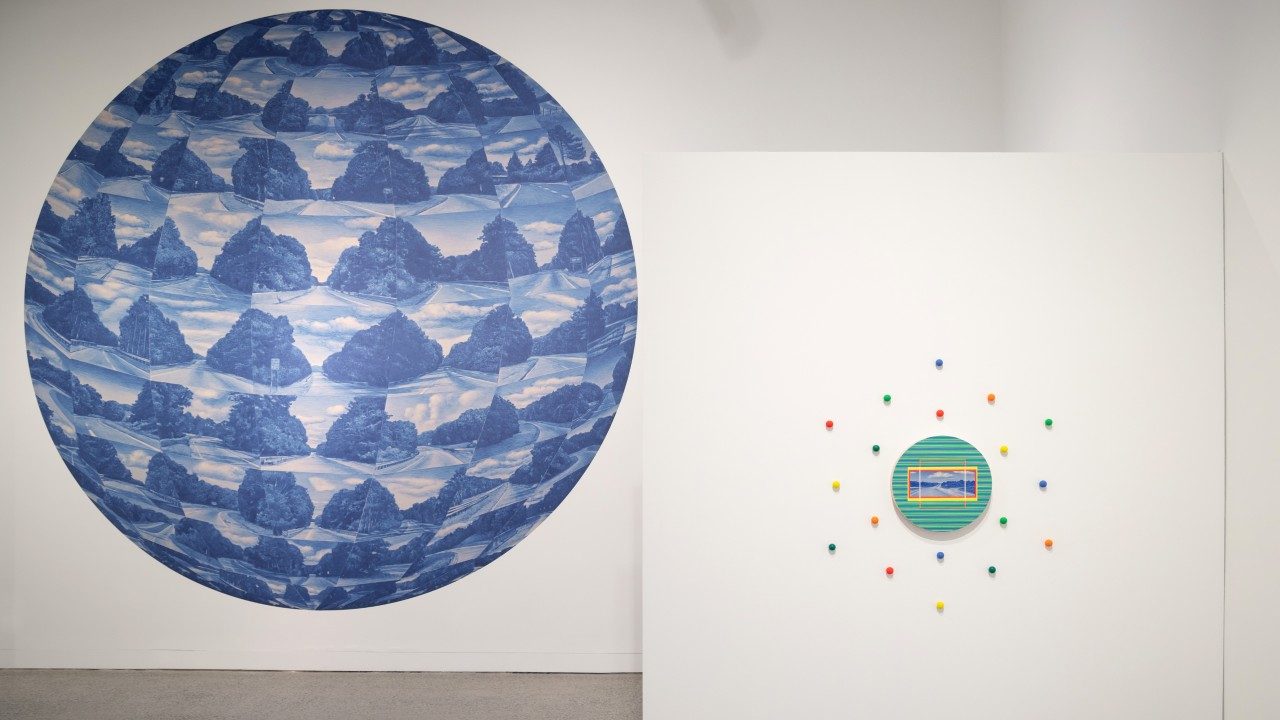 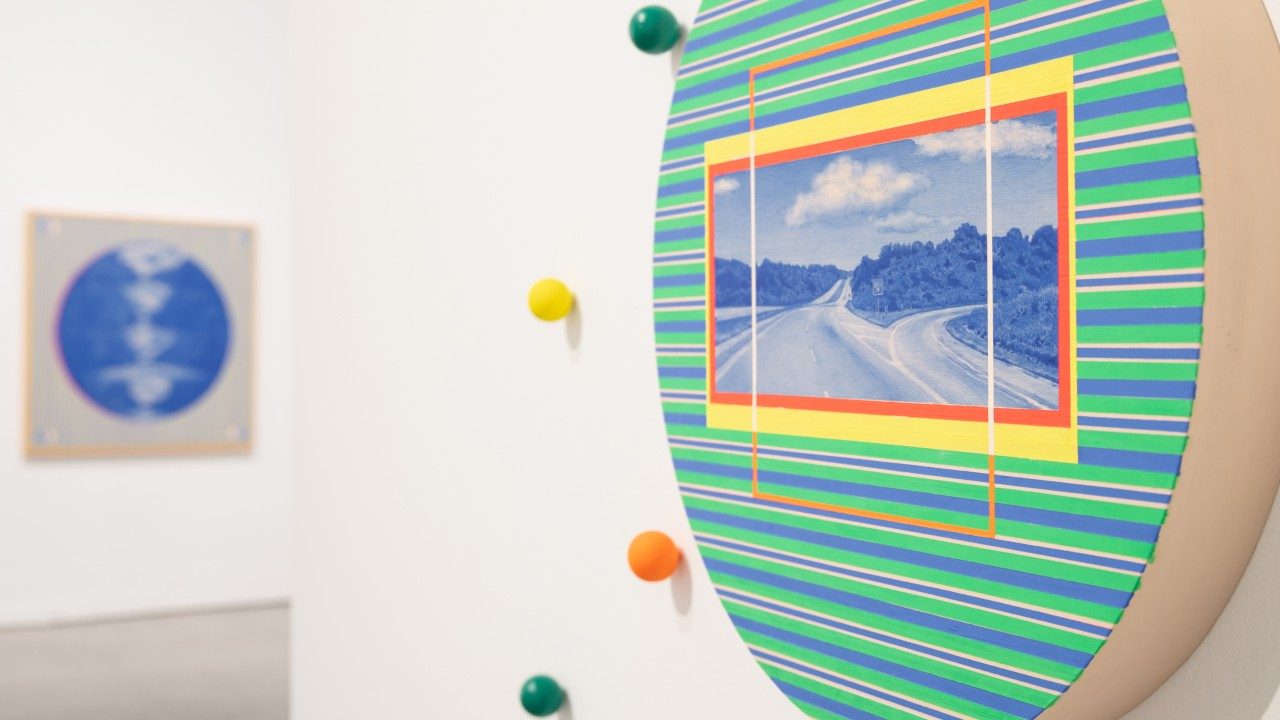 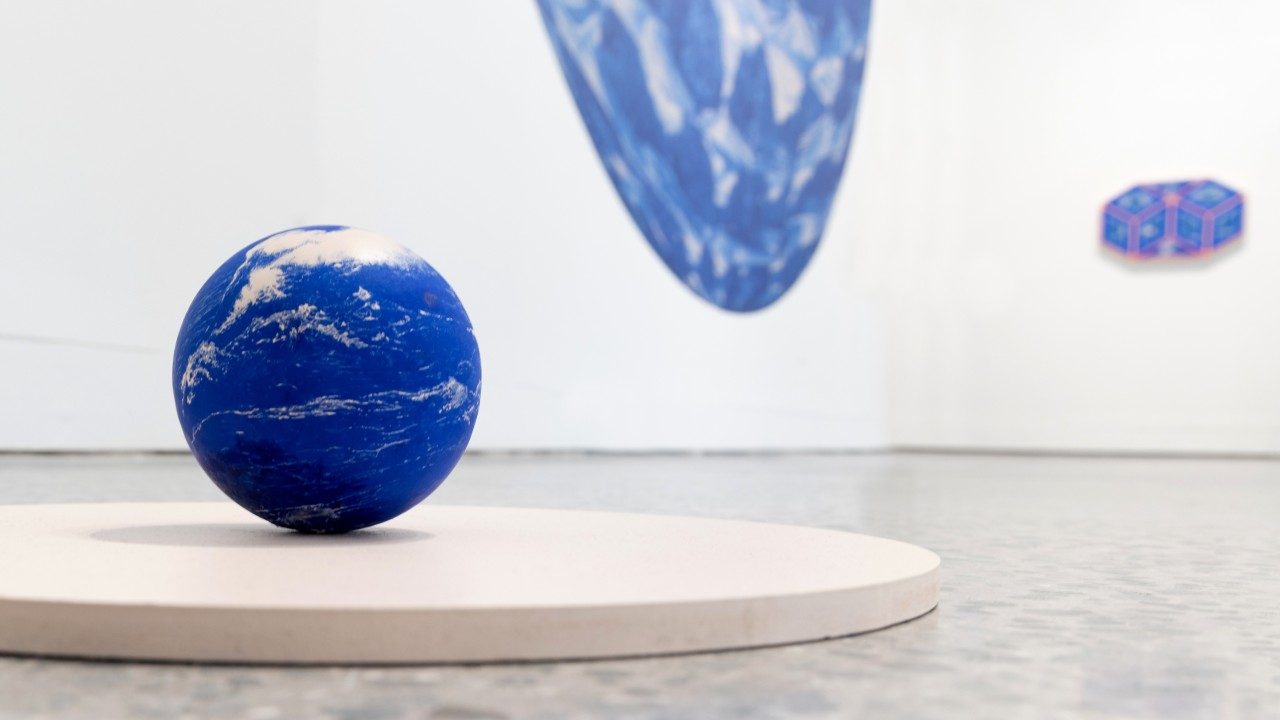 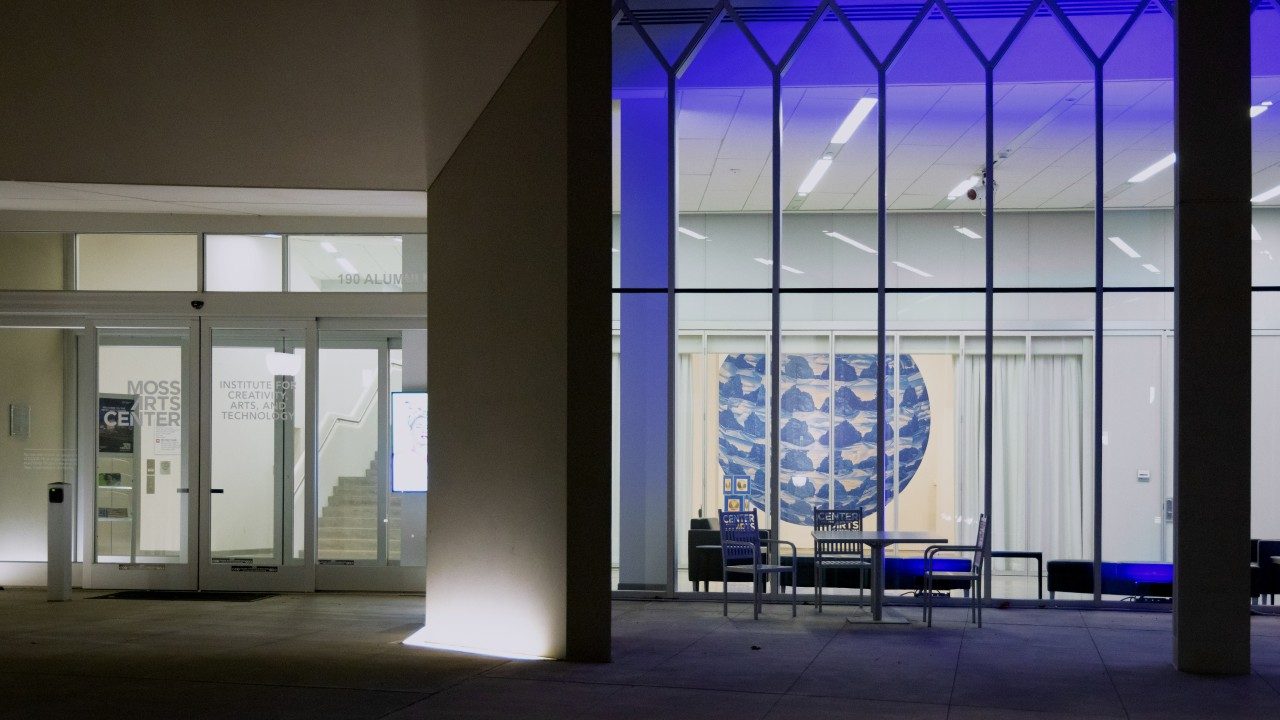 Choi borrows from the geometric abstraction of the Korean writing system consisting of lines and circles to divide and frame her photorealistic landscapes and embed them with meaning. A line represents human, circle represents sky, and square represents earth. We see this reference clearly in the Shape of Distance (Square and Circle), 2021, where the panel support is a diagonal union of a square and circle. The Earth square grounds the sky circle and its imagery that floats in the foreground.

In the triptych of thin horizontal panels, Blue Distant (Sequences), 2020-2021, each panel contains a sequential row of painted images and shapes, and the installed panels form a long line suggesting the horizon. Choi accumulates her highway landscape imagery while driving with a dashboard camera that takes bursts of photos. The sequential pattern imitates her process and lays out like a filmstrip. Through repetition of imagery and abstraction of language Choi expresses her cultural identity and finds meaning in the journey between places.

Choi (b.1976 in Korea, lives and works in Savannah, Georgia) received a bachelor of fine arts and a master of fine arts in traditional Korean painting from Hongik University in Seoul, Korea, in 2002, and a master of fine arts in drawing and painting at Georgia State University in Atlanta in 2014. Her work has been exhibited at the Korean Culture Center in New York; Korean Culture Center in Los Angeles; MOCA GA in Atlanta; B20 Wiregrass Biennial at the Wiregrass Museum in Dothan, Alabama; and included in the United States’ Art in Embassies program. Her work in the New Connections exhibition at the Korean Cultural Center in Washington, D.C., was reviewed in the Washington Post. In 2020 she was one of three finalists selected for the most recent 1858 Prize Contemporary Southern Art Award at the Gibbes Museum in Charleston, South Carolina. Choi is currently a professor of foundation studies at Savannah College of Art and Design.