Roots, Reeds, and Vines: The Art of Basketry

Throughout history, across generations, and in all cultures and regions of the world, baskets have served as functional objects and works of art. From the traditions of South Carolina seagrass and Appalachian basketry to innovative and intriguing contemporary forms, this exhibition presents the work of 12 outstanding artists whose creativity and exceptional technical skill come together in objects of beauty and fascination.

Friday, June 25, 12 PM
IN THE MOMENT: ARTISTS AND THEIR WORK | MARTHA OLSON
Free

Pamela Becker of Flemington, New Jersey, creates elegant works that reflect her continued exploration of pattern and color. Created with a coiling technique used by the ancient Egyptians as well as Southwestern Native Americans, her pieces are classic and simple in form, while enriched with vibrant color and intricate patterning. Becker uses reed as her core material, tightly wrapping each strand with linen and rayon, a process that took years of experimentation with many different core and covering materials to find the combination that she currently employs. For her, landscape is both the source and the inspiration.

For more than 40 years, Clay Burnette has used longleaf pine needles and waxed linen thread to make coiled baskets. In the sandhills of South Carolina, Burnette sustainability gathers his pine needles, dries them for several months, and then uses a needle and waxed linen thread to stitch them into coils. Using both uncolored and dyed or painted needles, he achieves a natural palette that is warm and sometimes iridescent. Instead of trimming off the needles’ sheaths, he uses them to create patterns and textures. Treating each basket like an adventure, Burnette follows no patterns and makes no preliminary sketches. Delicately balancing skill with the materials’ own properties, Burnette’s inventive baskets range from recognizable forms to the surprising, unpredictable, and unique.

From Champaign, Illinois, Ann Coddington creates sculptural forms with what she terms “elemental, physical, and tangible processes, human actions that remain within her grasp.” The ways the body senses and holds feelings is an underlying theme in her work. Titled “ephemera” (2020-2021), the wall installation featured in this exhibition spans the entire back wall of the gallery with up to 100 unique, inventive individual pieces. Each of these woven sculptural forms evoke and elicit response, from the immediately palpable to the fluid and intangible realm of both thought and remembrance.

Kathy Dulaney of Floyd, Virginia, has been weaving old Appalachian-style baskets for 35 years. For this exhibition, Dulaney has created a traditional Appalachian hen and an egg basket, which was used in olden times to take hens and eggs to market; a basket to store potatoes; and an oriole basket, named after and resembling an oriole bird nest with its small opening and bulbous body. Sharing the history of basket styles and their original uses is important to Dulaney, who teaches weaving to pass this tradition on to others.

From Fredericksburg, Virginia, Desmond Ellsworth is a member of the Nansemond Indian Nation and a descendent of the Saponi, Tuscarora, Nottoway, and Meherrin peoples. A self-taught artist, Ellsworth’s work uses several weave patterns to encode the heritage and history of his nation. He employs traditional southeastern weaving techniques, including the double and single diagonal weaves and customary plaiting that traditionally would have been created with river cane, white oak, maple, cattails/bulrush, and palmetto. With these materials becoming increasingly rare due to urbanization and climate change, Ellsworth uses commercial reed and chair cane for his baskets. 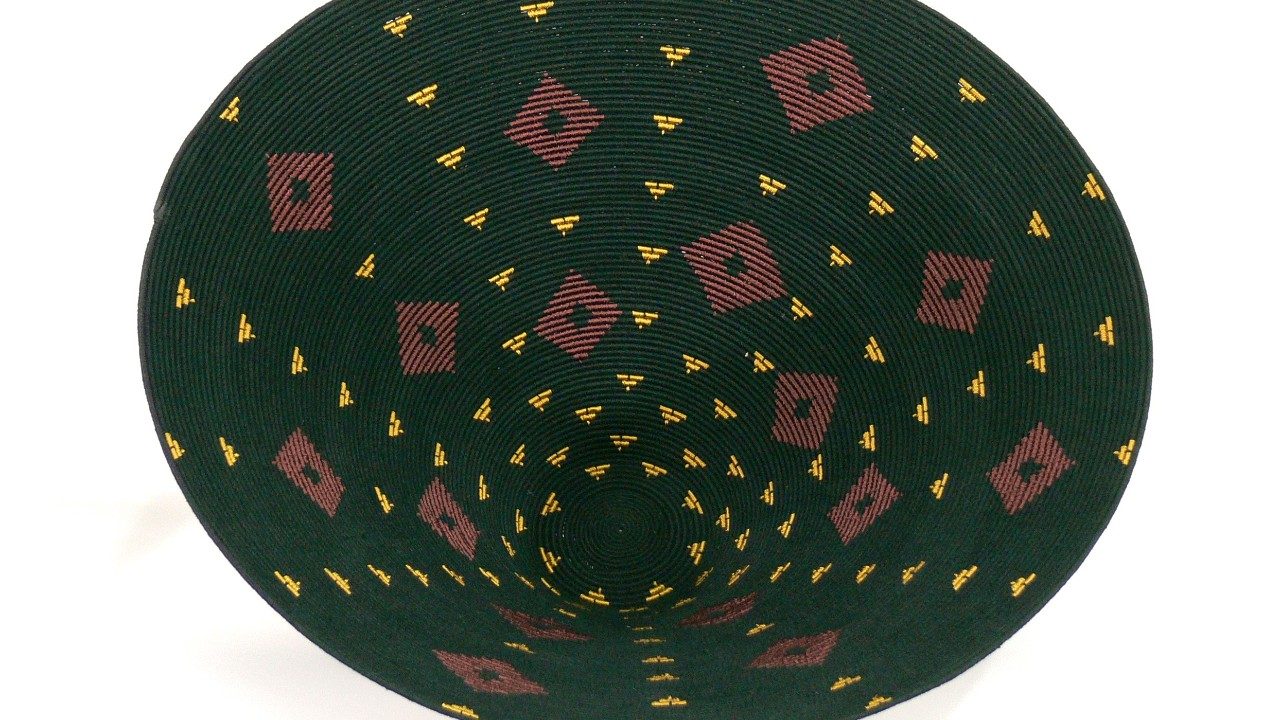 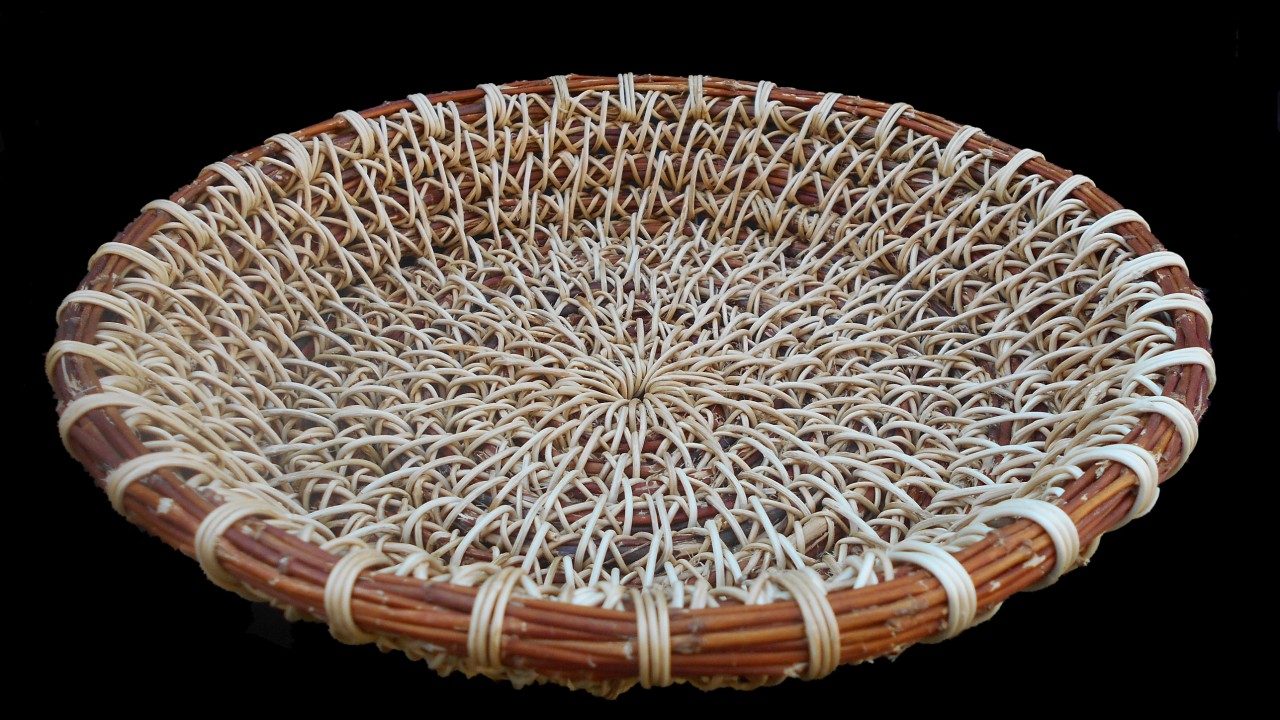 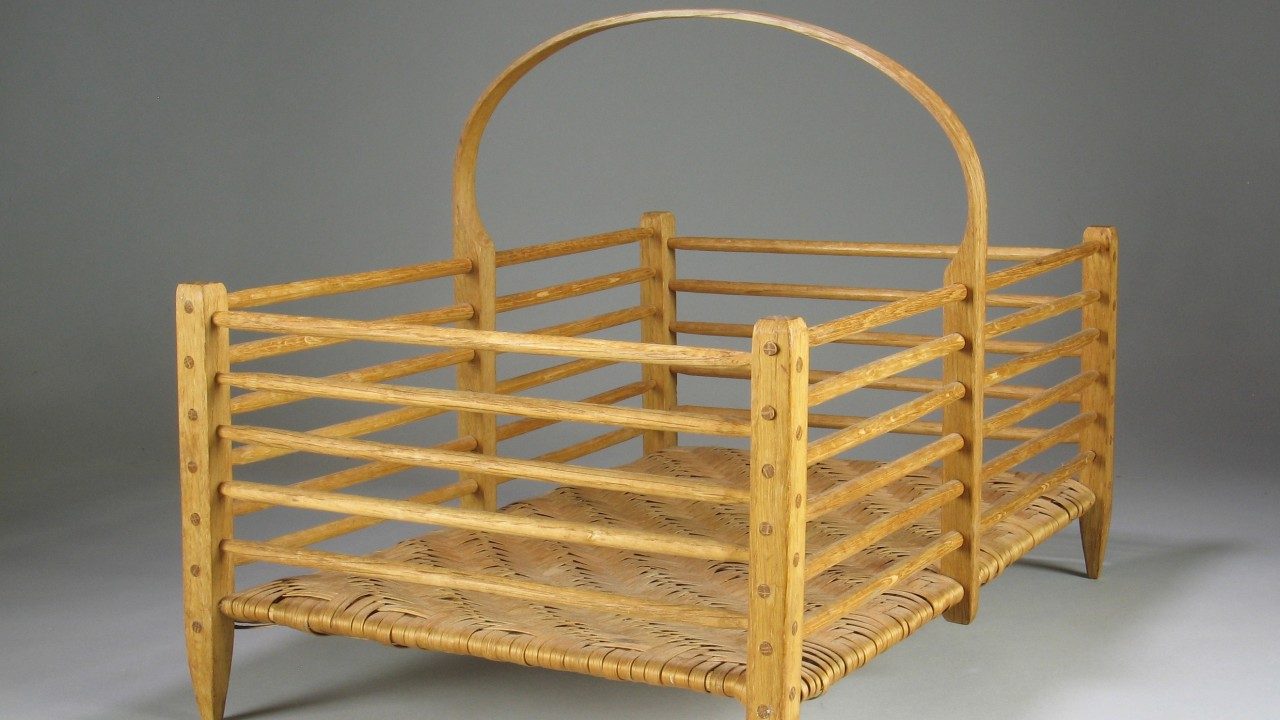 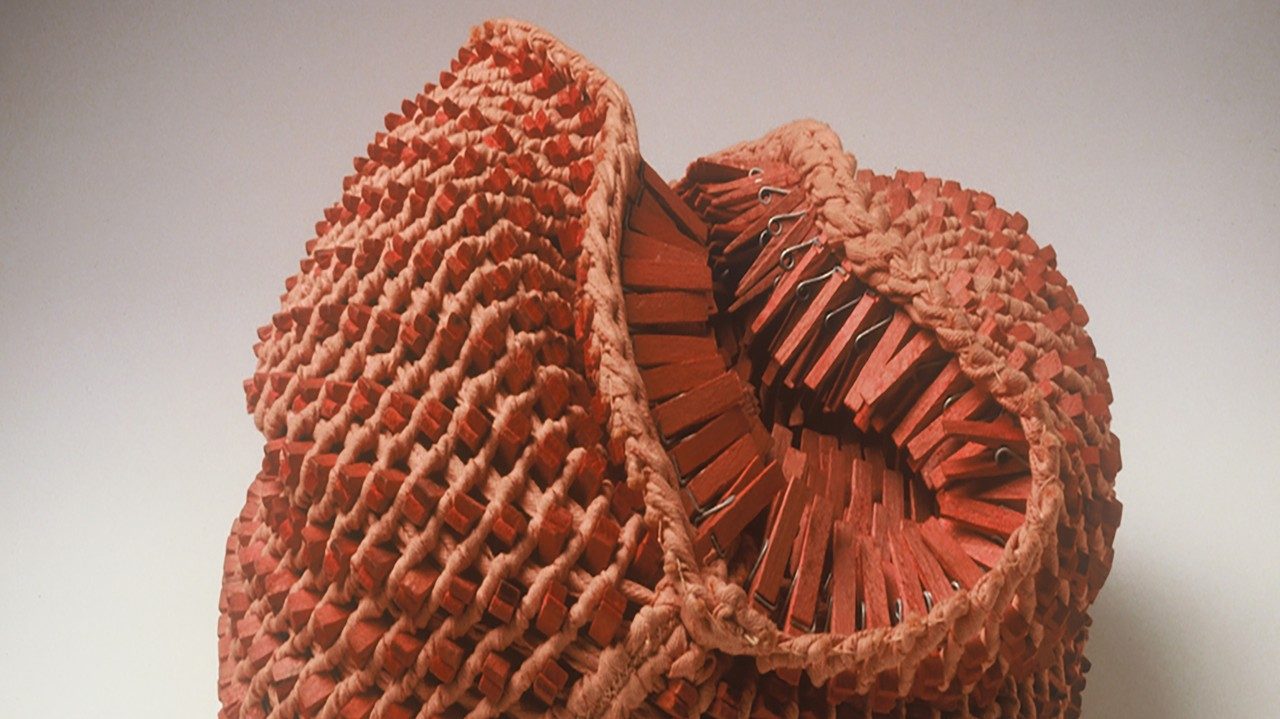 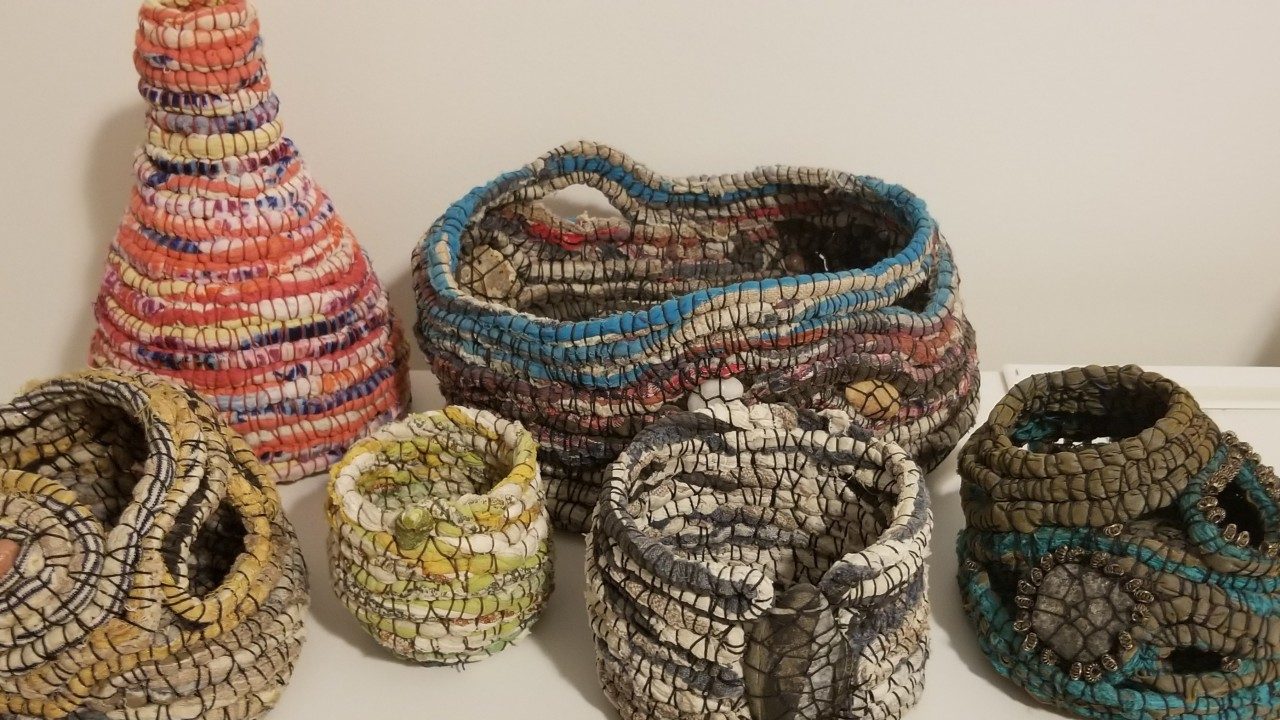 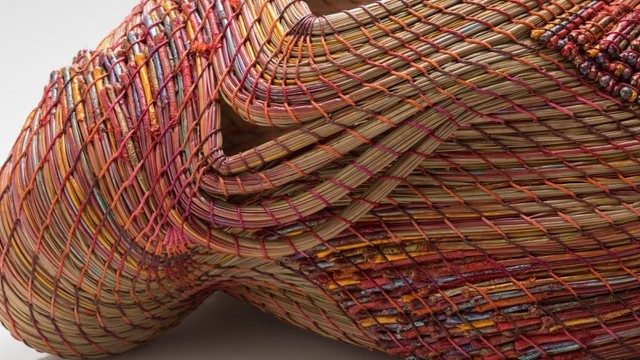 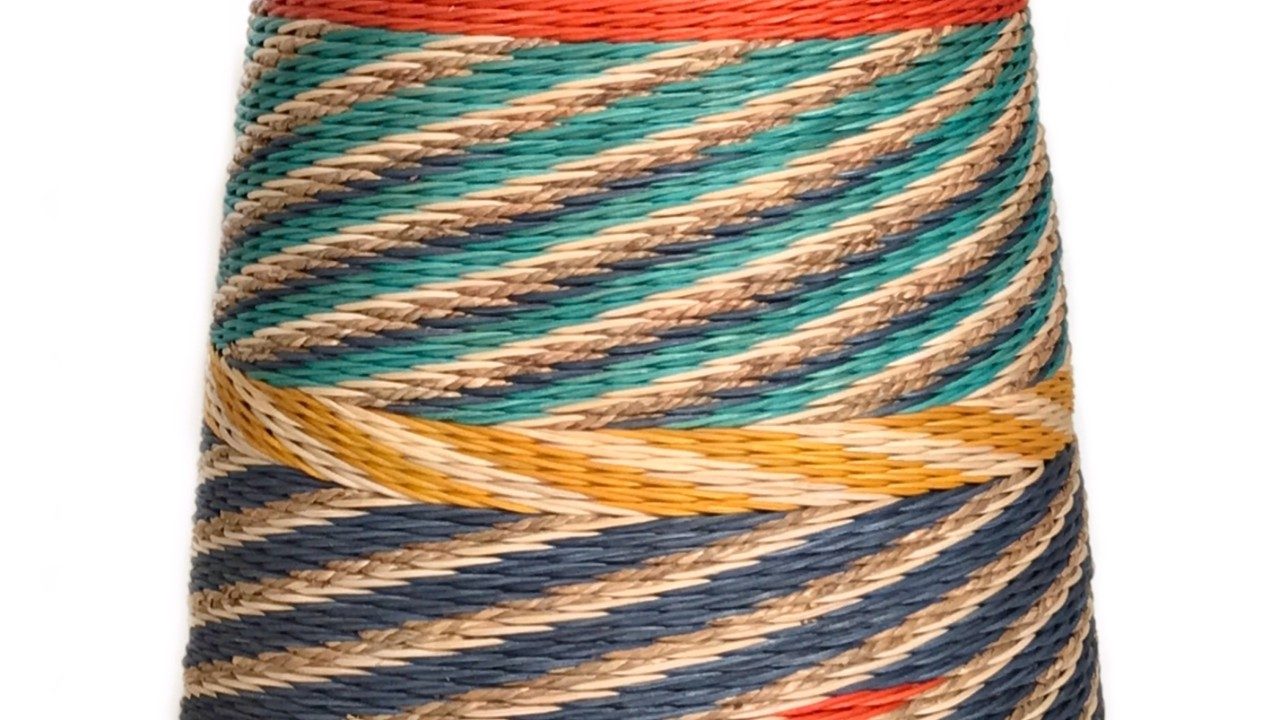 From Scottsville, Kentucky, Scott Gilbert and Beth Hester are masters of the Appalachian basket tradition. The couple studied the skill and history of their craft under the mentorship of Ollie and Lestel Childress, locally renowned fourth- and fifth-generation Kentucky white oak basket makers. Their exemplary works featured in this exhibition are made of white oak and include several varieties of traditional Kentucky egg baskets.

Kari Lønning of Ridgefield, Connecticut, began college as a jewelry and metalsmithing major, but graduated as a potter, studying design and found a desire to become an architect. She soon became interested in weaving and discovered that by weaving baskets she could build complex constructions. Lønning works with rattan, a tropical reed that grows as a long vine and can be dyed any color and worked into intricate patterns. One of the particularly ingenious techniques she has invented and uses in her work is her “hairy technique,” in which she embeds hundreds of shorter pieces of reed woven into the sides of the baskets to create especially unusual and unique forms.

Using wild honeysuckle vines found in the foothills of the Blue Ridge Mountains, Anne Scarpa McCauley of Free Union, Virginia, developed her own method of weaving honeysuckle when she was 12 years old. McCauley began creating little circles or wreaths for her hair and then baskets while out tending goats, and she has been making baskets, trays, and bowls ever since. A self-taught artist, her dense and intricately twined works are strong, lightweight, and unique.

Using deconstructed rag rug strands and coiling techniques, Martha Olson of Blacksburg, Virginia, weaves her creations out of humble materials — paper grocery bags, old rag rug, scrap fabric, found rocks, and beads. The fragments of rag rug used in the works on view in this exhibition are from old Swedish rugs woven by Olson’s mother-in-law, a subtle reference to not only generational histories but to the beauty and value of women’s work. Her works seem ancient and wizened with a few select and almost hidden embedded treasures—Ethiopian trading beads, African jade and turquoise, or found stones—a hint of the exotic hidden in the commonplace.

Using a number of basketry and needlework techniques, Karyl Sisson of Los Angeles, California, transforms familiar, undervalued, and overlooked objects into woven sculptural forms laden with patterning, repetition, and a sense of rhythmic undulation. Sisson has spent years rummaging through junk stores and scouring flea markets, salvaging cloth, buttons, zippers, and other sewing notions. Her exceptionally unusual forms are woven, with some that function as vessels containing interior spaces and others more twisted and closed.

A fifth-generation sweetgrass basket weaver from the low country of South Carolina, Lynette Youson grew up in a Gullah community where West African basketmaking traditions have been used for generations. Youson learned the craft from her grandmother, has weaved with her mother for over 45 years, and has taught the art form to her own daughters. Youson weaves a variety of traditional objects that are both beautiful and utilitarian. For example, the fanner baskets she creates were historically used to toss freshly picked rice into the air so that the wind would blow away the husks.